This is the part 2 of our tutorial to write a PE packer on Windows : handling imports and relocations, to execute an ASLR enabled file.

At this point, one of the main reasons our loader is not working properly is the absence of imports for the loaded binary. Every binary needs external functions to work, located in te Windows world in .dll files. For example, “calc.exe” is going to use functions to open a window, to displays buttons, etc … Let’s consider an example: “ShellExecuteW” (imported by calc.exe). You can see its documentation on msdn here.
Calc.exe needs this function to work properly, so it needs to know where its code is located. The fact is, with dll, we only load them at runtime, at any place in memory, meaning the compiler has no way to know where it is going to be (and even more with ASLR activated). So, it cannot produce a proper call instruction with the immediate address for “ShellExecuteW”.
That’s why the compiler creates a table (the IAT, as we are going to see), where it expects to find the address of “ShellExecuteW” once it is loaded and will call this address when needed.

In a debugger, we see this:

The first call is an internal call, in the same module. The compiler knows where the destination is, and used the E8 opcode, meaning “realtive call”. When calling external modules, it calls a value read from the IAT, as shown with “ShellExecuteW”.

Function can be imported either by their name (an ascii C string), or by their number in the export table of the DLL (called “ordinal”). We’ll see that when loading.

Imports in the PE header

Now let’s see how it is described in the PE header. It is a bit complex, so bear with me, it is actually much simpler to code than to describe!

First, we are going to take a look at the “Data Directories”. They are part of the “Optional Header”. It is a simple array of 15 structures, with RVA and size. You can see them in CFF: 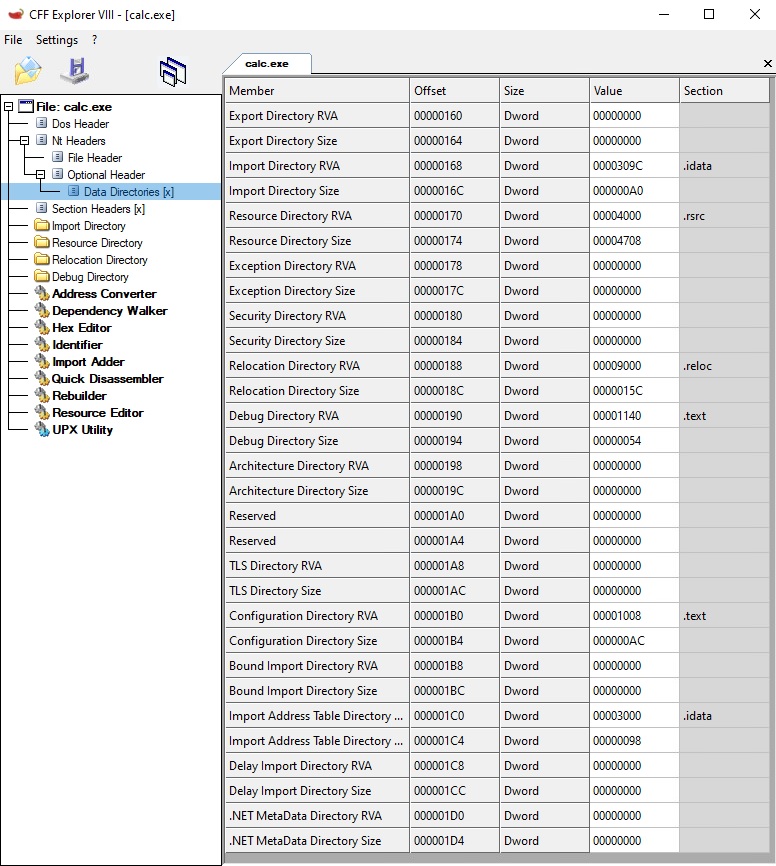 CFF can show you the content of the IDT in the “Import Directory” menu on the left: 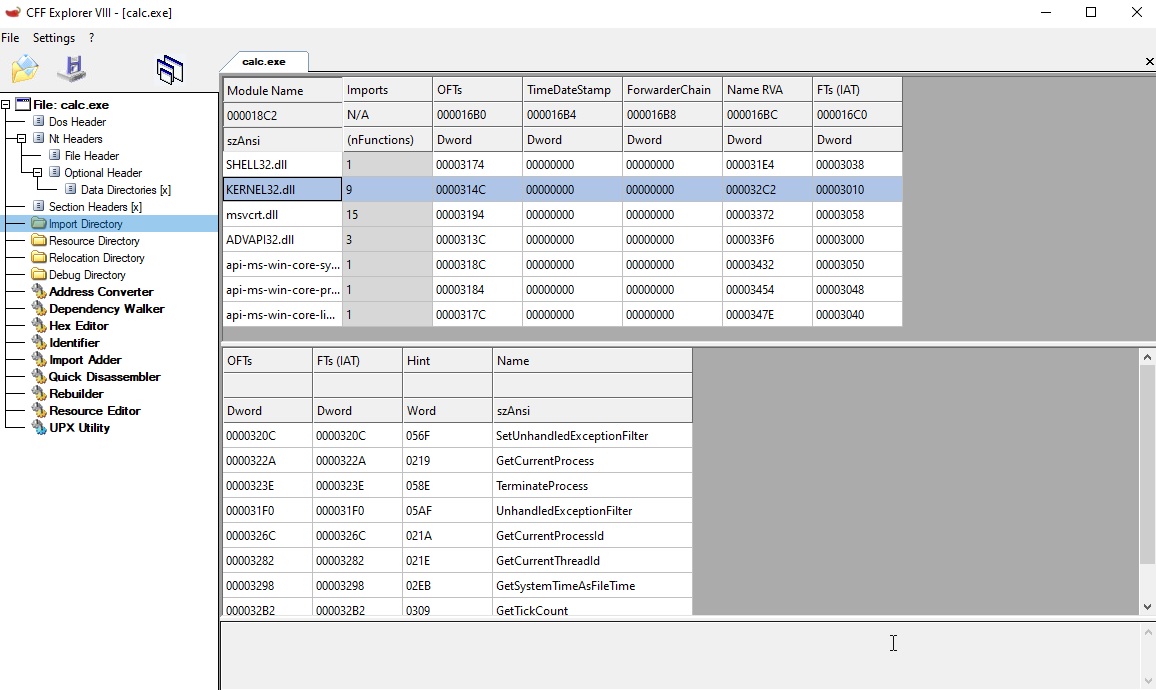 First you see what DLL are imported, and if you click on it, you see the actual functions imported.

It is actually described like that in the header: the “Import Directory” RVA found in the “Data Directories” points to a NULL termianted array of IMAGE_IMPORT_DESCRIPTOR :

The second one is the IAT, it has the exact same structure, and when we get the function address, we place is at the mirrored position between IDT and IAT.

We know have everything we need to program the imports. This need to be done after we put the sections in memory (so we can look for RVAd irectly in the memory we allocated, relative to the ImageBase we chose for our module), but before we modify the permissions (and may remove writing privilege).

A side note on IMAGE_THUNK_DATA : this is a simple union, equivalent to a DWORD. I prefered to use it because:

We are almost done, but we still need to talk about relocations.

Let’s think about what we did for now:

And now, at some point, calc.exe is going to call those imported function, by doing this call we saw earlier:

Take a good look at the opcode: FF15, followed by 0x004b3038 in little endian. That second number is an obslute virtual address, of the “ShellExecuteW” address in the IAT. And that, is a big, huge issue for a PE that is expected to be moved.
Let’s say we place our calc.exe PE at VA_0x00500000 instead of VA_0x00400000 like it is “supposed” to. This instruction is still the same. So, it is still going to look at the addresse VA_0x004b3038 which is not even part of calc.exe memory! There could be anything, or most probably nothing there.
What we are seeing here, is that when mooving a PE, the assembly code needs to be patched at runtime, to account for this change, and that is what relocations are all about.

This structure is simpler that the imports one, but it is not as essential to know its exact inner working. When unpacking a malware for example, it is common to have to rebuild or patch an import table. But relocations are never an issue: you just disable the ASLR (uncheck “Dll can move”), and relocations are not needed, because no “relocating” takes place.

So, the “Data Directory” has an entry for the relocation table (an RVA, like the others). This relocation table is made of blocks following one another directly. Each block is composed of a header, and an array of word. Here is the header:

After this header are a list of word (2 bytes !), ending with the block (so we need to use SizeOfBlock to know when to stop). Each word is as follow:

This basically gives us an array of Virtual Addresses to patch. The patching consist of shifting the DWORD pointed to by as much as we shifted the “Image Base” of the module.

Again, this need to be between the sections mapping and changing their permissions, especially since the code section, .text, is going to be read and execute only, and the whole point of the relocations is to write inside.

Here is the code moving through the relocatiosn blocks, and patching the memory:

And now, that should be it!

The final code can be found here:
https://github.com/jeremybeaume/packer-tutorial/blob/master/part2/main.c

You should now be able to compile your loader, and run it to load any 32 bits ASLR enabled .exe files, for example: loader.exe C:\Windows\SysWOW64\calc.exe .
This may not be impressive at all, you could have used the system or CreateProcess functions, but those 2 actually create another process, as the name suggest. We didn’t, we executed calc.exe from within the memory of our loader, which is exactely what we are going to do after we unpack a binary. Instead of getting the PE data from the file system, our packer will read it from its own memory. That’s the point of the next step in this tutorial: Part 3 : packing with python.