In this first tutorial part, we are going to write a program that reads a PE file, parse its headers and maps its sections in memory.

As an example, we will be using the 32 bits version of calc.exe, located here: C:\Windows\SysWOW64\calc.exe (yes, the 32bits binaries are in SysWOW64, not System32, I know …)

Let’s jump right in: we’re going to read a file and put all its content in memory.

Nothing fancy here, we can compile it with: mingw32-gcc.exe main.c -o loader.exe, run loader.exe C:\Windwos\SysWow64\calc.exe, and see our [+] Loading PE file.
Note the “tips” at the end: to call an arbitrary address, we casted the void* into a function pointer, before calling the pointer.

Now the whole point is going to be programing the load_PE function.

Before jumping into the PE headers, let’s talk about adresses. We’re going to use 3 “types” of addresses:

The conversion between VA and RVA is trivial (just add or remove the ImageBase). To convert to the Raw address, you have to look at the sections, we’ll see that below.

Every executable file in Windows is in a format called PE, for “Portable Executable”. That include “.exe”, but also “.dll” files.
Let’s take a first look at how a PE file is made. Open calc.exe with CFF explorer (you sould have an explorer right click option): 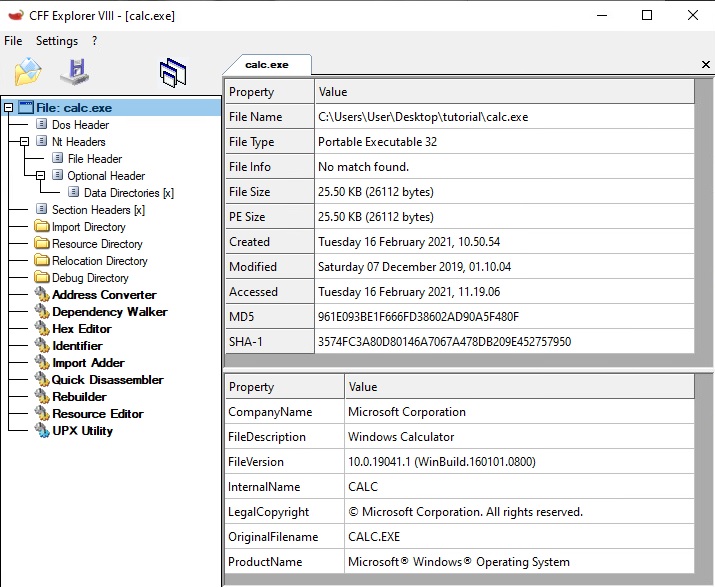 On the first screen, you’ll see a summary of information regarding this file. You can check the file type is “Portable Executable 32”, which means 32 bits. 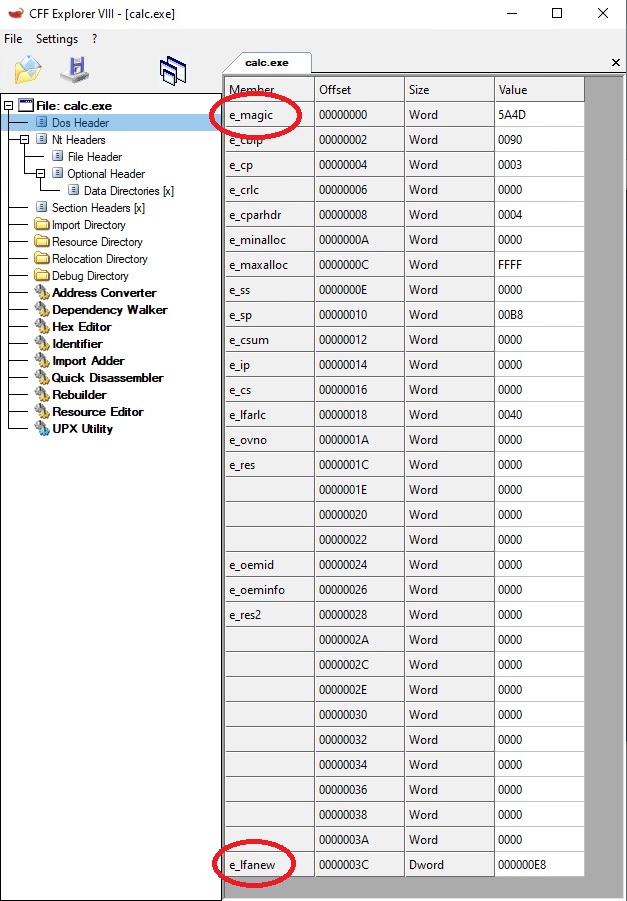 Evry PE file starts with a DOS header, and the signature, the 2 firsts bytes, is always the same: “MZ” (0x5A4D). The rest of the fields are pretty much useless, we’re only going to use e_lfanew which is the Raw address of the next header, the NT header.

Note: The column “Offset” is present is all the screens of CFF Explorer, and is what we called the “Raw address” earlier. Can be usefull for debugging.

In case you’re wondering what is between the e_lfanew field (at Raw_0x3C) et the NT header (at Raw_0xE8), it’s the DOS stub (“This program cannot run in DOS mode”), you can go check it out with the Hex Editor:

So, let’s start our loader. Those headers have structures already defined inside winnt.h, which you should keep around. We’re also importing windows.h, which comes with all the standard windows functions we’re going to use later.

For the sake of simplicity, we’re not going to check the signatures, considering we trust ourselves to not pack something that isn’t a PE32 with our PE32 packer. The DOS header parsing is quite trivial:

This “NT Headers” we now have actually is a simple signature (“PE”), with 2 other headers inside. We can see the signature in CFF:

Right after this header (or inside from the C structures point of view) is the “File Header”: 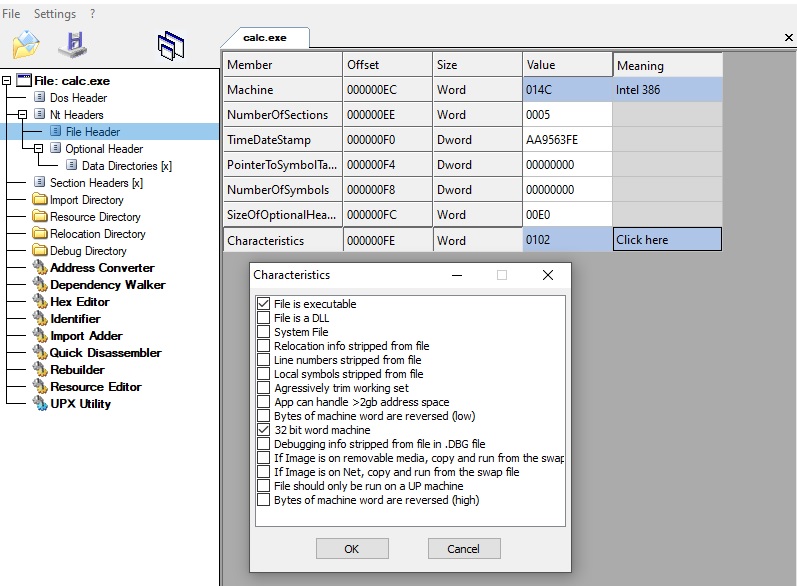 Here we have essential informations:

And right after this File header, we have the “Optional Header” (and it is actually mandatory, not jocking here): 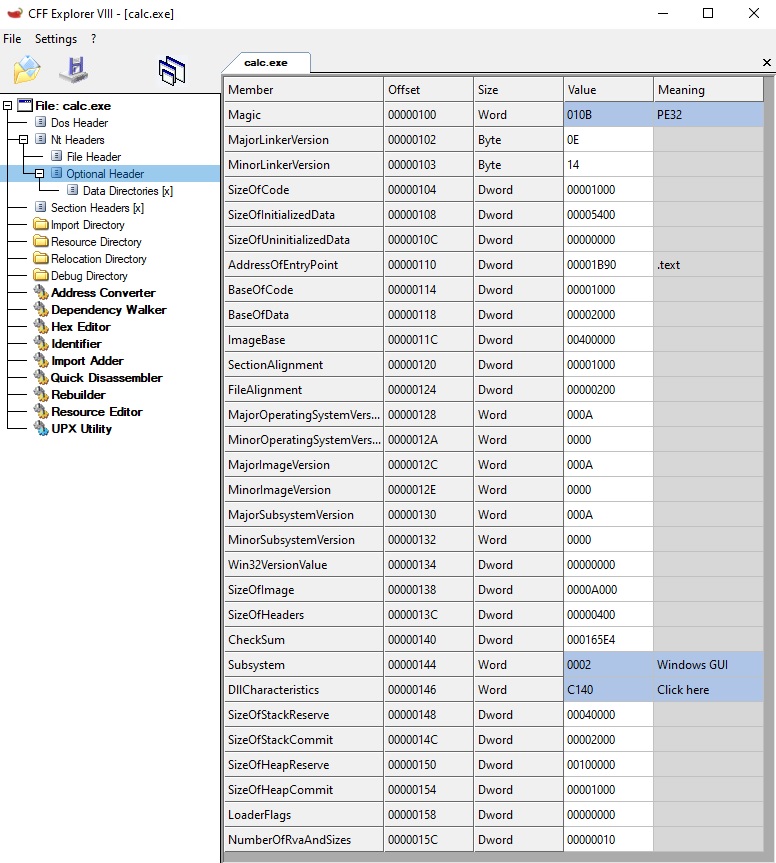 There’s A LOT of information here, but most of it is not actually used, or always the same. The essential points are:

And right after all this are the “Data Directories”, we’re going to skip then for the moment, we’ll come back to it later. Let’s put all this in action ! Here is the structure for the “NT Headers” in winnt.h:

As you can see, no pointers there: the headers are inside one another, meaning we already have everything set up. Let’s extract a few informations:

That’s pretty much all the fields we’re going to need.

We have the size of the image in memory, let’s allocate it. For now, we’re going to only consider loading binaries that have ASLR enabled, so we can allocate memory anywhere, it will not cause any issue.

We allocate size_of_image bytes in memory, anywhere, and that will be our ImageBase. We’ll be loading the PE at this address, which is not the same as the header’s “ImageBase”, that’s what ASLR is all about.

Then, we are going to start loading our PE content in memory. The first thing we can do right now it copy its header. The PE header is always copied at the ImageBase or every module in memory, so let’s have it:

So for now we have the memory, we copied the header, but no actual code has been loaded, and that’s what we’re going for now: sections.

The PE binary, and memory once loaded, is divided in parts called section. Let’s take a look at the header (which is right after the previous one): 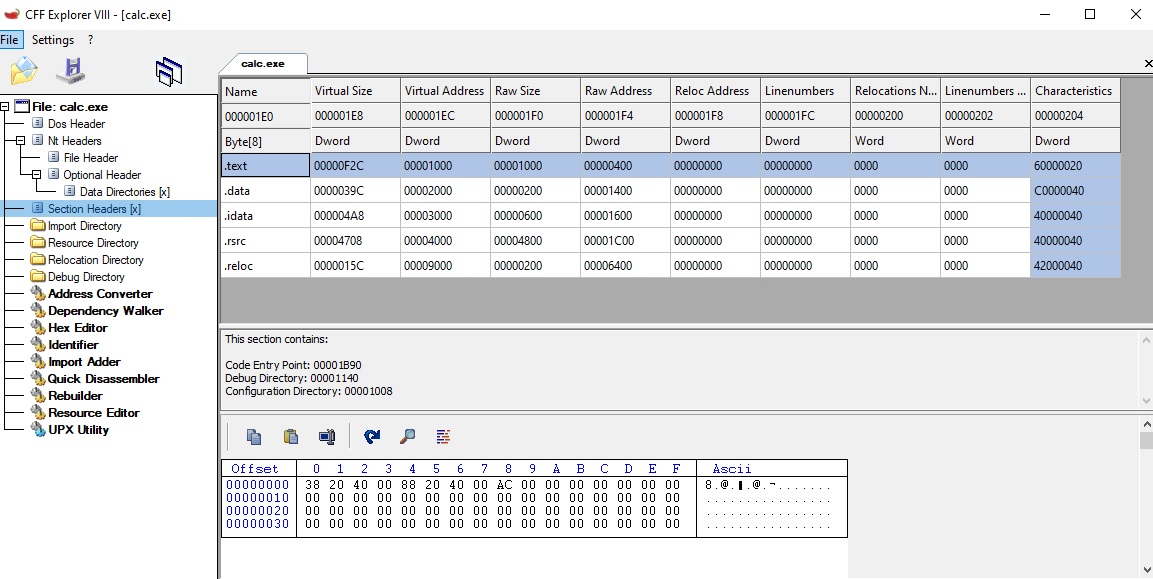 We have here 5 sections, each with:

Note that VirtualSize and Raw size can be very different. A greater Virtual size means there are unintialized data put in memory. There could be a section with no RawSize, that would create a memory space with zeroes inside. And a greater RawSize is simply a matter of padding (padding size defined in the field OptionalHeader.FileAlignment, 0x200 commonly).

We can now copy our PE file content in memory, at the right places:

And there we are. All the sections are loaded in memory. Everything is allocated. We also understand now how to convert from Raw Addresses to Relative Virtual Addresses (and the other way around): we need to look at the section table to match them. CFF has a very usefull “Address Converter” menu on the left which I’ll just let you check out.

If you noticed, all the sections are read/write, so no execute yet. We can see to it, and set their permissions to match the ones described in the section header:

And to finish, we can return the address (VA) of the entrypoint:

The final code can be found here : https://github.com/jeremybeaume/packer-tutorial/tree/master/part1

This may seem to work, but there are actually 2 very important steps we have yet to program: manage the imports, and handle relocations. But that’s for the next part of this tutorial : Part 2 : imports and relocations